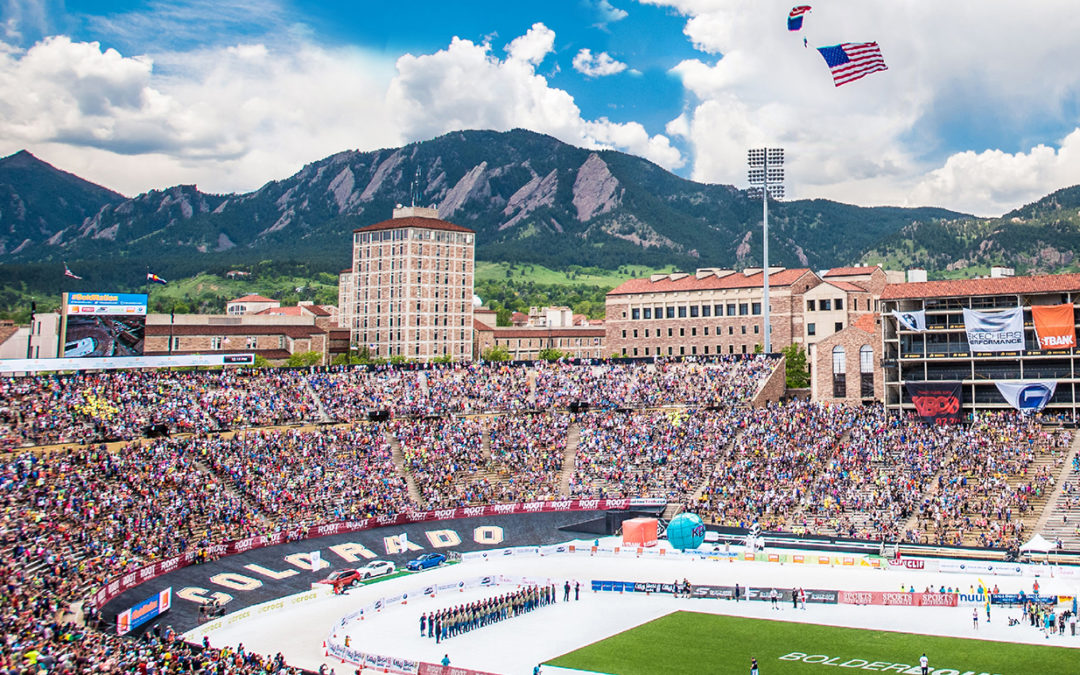 BOULDER, CO – (June 1, 2020) Organizers of the BOLDERBoulder today announced that the 2020 race, which already had been postponed from its traditional Memorial Day weekend to Labor Day weekend, is cancelled due to an abundance of caution related to COVID-19, and it is rescheduled for Memorial Day, 2021.

While the health and safety of or participants, volunteers, and everyone directly and indirectly associated with the BOLDERBoulder is without any hesitation, paramount; this is the most difficult and disappointing decision we have ever had to make, said Race Director Cliff Bosley.

“We have been keeping closely attuned to all the latest information from local and state health officials, and having regular discussions with our partners – CU Boulder and the City of Boulder – as well as our sponsors. After consultation, we are all in agreement and we determined that bringing together tens of thousands of people could be a risk to the community.”

Bosley said he has been working closely with the city and with CU Boulder, which last week announced its plans to reopen the campus in the fall. Those plans include limited gatherings.

“We appreciate everyone’s understanding and we will be back stronger and bolder than ever for the 42nd BOLDERBoulder on Memorial Day, May 31, 2021,” he said.

Participants already registered will be offered several options and alternatives for the 2021 BOLDERBoulder and beyond.

The BOLDERBoulder, named “America’s All-Time Best 10K Race” by Runner’s World magazine, would have seen its 42nd running this year. It is the first time since its founding in 1979, that the race has been cancelled.

“We recognize the race is not only an annual tradition for thousands of runners ranging from the casual to the elite, but also an important event for the Boulder community,” Bosley said. “We did not make this decision lightly. We considered all our options and implications and in the end knew there were no considerations more important, that health and safety were the prime imperatives.”

Bosley said the decision was delayed as long as possible to find a way to go forward. “Just as our participants have to train and prepare for some time leading up to race day, so do we.” He said, “We’re open for business one day a year but our preparations and planning continue for another 360 or so days.”

The race’s traditional finish line is at Folsom Field on the CU Boulder campus, where more than 1.4 million participants have finished the race. CU Boulder Chancellor Phil DiStefano said, “We are as disappointed as anyone about the need to cancel this year’s BOLDERBoulder, since its finish at Folsom Field has been a signature event on our campus since 1981. But we believe this is the right decision given the public health concerns and risks regarding the COVID-19 virus.  We value our long-term partnership with the BOLDERBoulder and look forward to being back stronger and bolder than ever next Memorial Day.”

Boulder City Manager Jane Brautigam expressed… “The city is disappointed that this iconic event must be cancelled as it is always a time for our community to celebrate and to remember the long legacy of the race in Boulder.  Certainly, this year has brought changes that remind us that our primary focus must always be on the health of the participants and the wider community audience.  We look forward to a time when we can once again welcome the many racers from places far and near – to run together and run free.”

Bosley concluded, “BOLDERBoulder and FORTitude will have their own 2021 races. Their continuing contributions to Boulder and Fort Collins and the sport of running is intact. The tens of thousands of racers, runners, joggers, and walkers in Colorado know America’s best 10k races are here for them.”

The BOLDERBoulder, named America’s All-Time Best 10K by Runner’s World, is the 4th largest running race in the United States and the 7th largest in the world. The race attracts 48,000 to 52,000 runners, joggers, walkers, and wheelchair racers, and professional athletes from around the world to compete for one of the largest non-marathon prize purses in road racing. The course winds through Boulder neighborhoods with live music and entertainment at every corner. The race finishes at the University of Colorado’s Folsom Field and attracts over 100,000 runners and spectators. The 42nd running of the BOLDERBoulder will be held on Memorial Day, May 31, 2021. www.bolderboulder.com

Since its founding in 2017, the FORTitude 10K has attracted more than 15,000 runners, joggers, and walkers. Hosted in Fort Collins, Colorado, the race is one of the fastest 10,000 meter courses above 5,000 feet of altitude. The race starts near Moby Arena at Colorado State University winds through historic neighborhoods in Fort Collins and finishes at Canvas Stadium at CSU. The FORTitude name and battle cry – “Go Fort and Conquer” – embody the spirit that invites seasoned and new runners to join the fun and show their toughness running at nearly 5,000 feet above Sea Level. The FORTitude 10K will be held Labor Day, Monday, September 5, 2021. www.fortitude10k.com