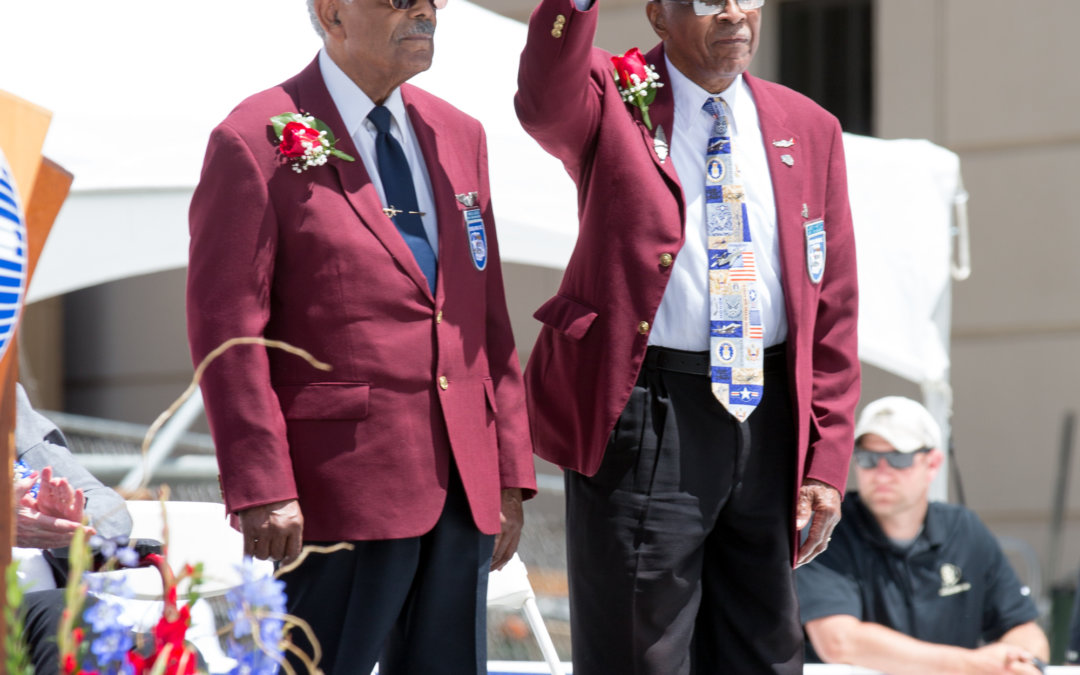 Colorado’s own, Frank Macon died at his home in Colorado Springs at the age of 97. Macon was one of only two original remaining Tuskegee Airmen and was honored at the 2015 BOLDERBoulder Memorial Day Tribute alongside the other remaining airman, Lt. Colonel James Harvey, III.

The Tuskegee Airmen were the first African-American military aviators in the U.S. Army Air Corps (AAC), a precursor of the U.S. Air Force. Trained at the Tuskegee Army Air Field in Alabama, they flew more than 15,000 individual sorties in Europe and North Africa during World War II.

From the BOLDERBoulder 2015 Memorial Day Tribute

The skill and heroism of the Tuskegee airmen is legendary. this African American, segregated fighter group demonstrated uncanny aerial skills and compiled an unprecedented combat record.

Both Frank Macon and James Harvey are original Tuskegee airmen.

Frank Macon was in high school in Colorado Springs when the war broke out. He immediately reported for army flight training. but when his mom called the army looking for her son, they learned he had lied about his age and sent him home. When he turned 18 Frank reported again and became a Tuskegee airman. In 1944, he flew his T-6 into a steep dive, with every intention of pulling up sharply and rolling into gunnery position on his instructor pilot in the opposing aircraft. He blew out both of his eardrums. He was in his final phase of training but never flew over Europe. He claims that Hitler surrendered before he could get there because he heard about the crazy kid from Colorado coming to get him.

Lieutenant Colonel James Harvey stayed on with the air force after the war. He was part of a three-man team that represented the segregated 332nd fighter group in the air force’s first top gun competition in 1949. Every fighter group in the country participated. The African American pilots, including Harvey, won the first top gun trophy, and it wasn’t even close. The victory was swept under the rug and they were not recognized for their accomplishment until 1995.

When the services ended segregation, Harvey reported to an integrated squadron to fly fighter jets. At first, white pilots swore they wouldn’t fly with the Tuskegee airman. But in aviation, skill matters the most. Harvey will tell you that the Tuskegee airmen were the very best. The racial barrier was shattered as they became fully accepted as peers. James flew 126 combat missions over Korea and retired as a lieutenant colonel. In 2007 the Tuskegee airmen were awarded the congressional gold medal.

Service doesn’t always take place on the battlefield. Sometimes it takes the form of moral courage. The kind of moral courage it takes to serve the country you love, even in the face of discrimination. The kind of moral courage that it takes to answer your nation’s call in unfamiliar roles. These great Americans advanced the ideals of our nation, in order that the words of our founding documents were met in their fullest meaning. We are all created equal and endowed with unalienable rights. We all share the right to life, liberty, and the pursuit of happiness.