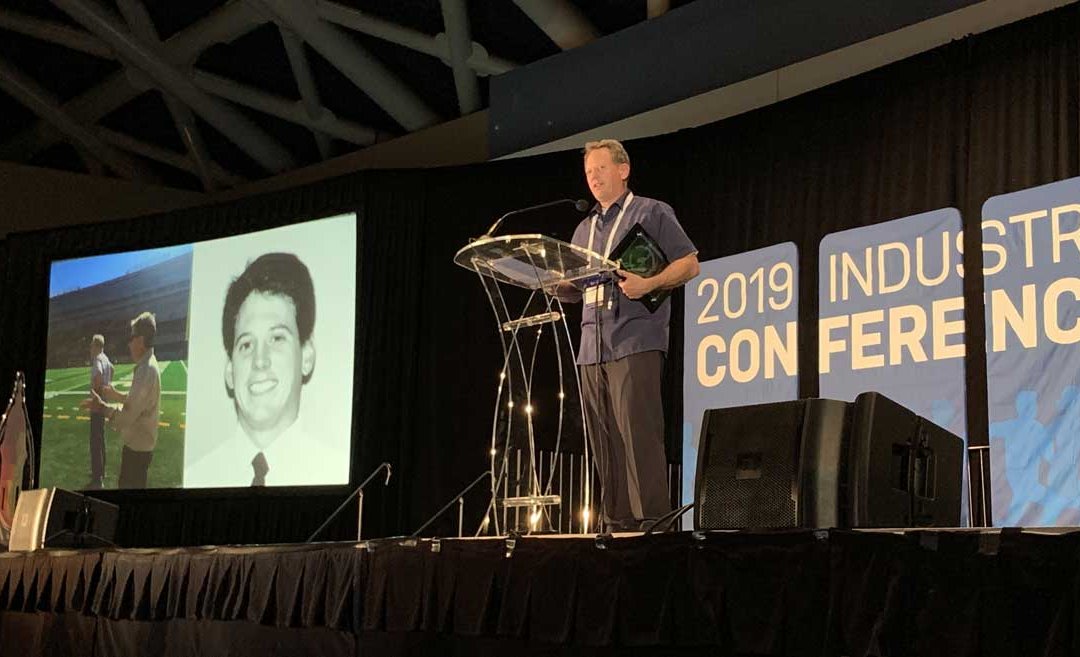 San Juan, Puerto Rico (Sunday, Feb. 10, 2019) – In a spirited evening of celebration at the Puerto Rico Convention Center, Running USA honored numerous deserving individuals and organizations as the Industry Conference powered by the ACTIVE Network (#RUSA19) got off to a fun-filled start tonight.

“As always, this was a standout evening celebrating the best and brightest in our sport and industry,” said Running USA CEO Rich Harshbarger. “It is an honor to provide this forum to celebrate leadership, longevity, and the future of running.”

Following a delicious meal, the industry awards went to:

With his first run at BolderBOULDER as a 12-year-old in 1979, Bosley led the famous Colorado Memorial Day race – which was founded by his father, Steve — to its wildly successful 40th edition in 2018. The Bosleys become the first father/son duo to be inducted into the Running USA Hall of Champions. Steve Bosley was part of the Hall’s inaugural class back in 2004. Cliff has led the BolderBOULDER organization as race director for two decades and overseen its development into a full-fledged event production organization, expanding from one major race to three with the addition of the FORTitude 10K and ColderBOLDER. Known his dedication to detail, Cliff Bosley is widely respected and has received numerous major running industry honors.

Stasaitis is known as a passionate advocate for continuing education and advancement in the sport, clean athlete performance, and exceptional customer service to runners. He has served as race director for the famous Boilermaker Road Race for the last 10 years, and also directed the American Heart Association’s annual Utica run/walk for 17 years. Under his leadership, that race more than quadrupled its annual fundraising total to $1.2 million annually. A heart disease survivor himself, Stasaitis is a lifelong runner and has received numerous industry accolades.

With over two decades of service to the running industry, Amy and her husband Jerry founded J&A Racing with the goal of delivering positive experiences for Virginia athletes. Frostick’s skills as an event planner, manager and marketer are well known throughout the industry. She has helped grow participation in J&A’s flagship event, the Yuengling Shamrock Marathon, by 10 times, and was also lauded by nominators for her success in introducing more women and children to the sport.

Hess and his business partner Eric Marenburg founded the San Diego Running Company five years ago and have rapidly grown their business from three small races with less than 1,000 runners to a successful operations company. More than 30,000 runners crossed their finish lines in 2018. But Hess’ star is especially bright because of his willingness to give back to local non-profits. He’s worked on many races pro bono and helped San Diego non-profits raise over $750,000 already in his short but outstanding industry career.

Kids Run the OC, a youth running program designed to help children have fun while running, getting fit and learning healthy eating behaviors, was awarded the $10,000 Youth Grant Award. In 2018, the program had over 9,200 registered children, 225 trained coaches, and 150 schools and educational agencies participate.

“We know Allan was a passionate advocate for the growth and continuing education of those in the running industry and it is a pleasure for us to be able to carry that legacy forward,” said Harshbarger.

“Our volunteer day was so rewarding for everyone who participated. You could really feel the spirit of our industry out there,” said Christie Bowen, Running USA vice president of programming, partnerships and operations. “To be able to do something like this for the first time in a place as deserving as San Juan was really special.”

Two days of education, networking and fun continue today and tomorrow. Use the hashtag #RUSA19 to follow the fun, and mark your calendars for Feb. 9-11, 2020, when the Industry Conference heads to Las Vegas, Nevada. (Yes, let me know when registration is open! !)

About the Industry Conference

Since its origins as a small gathering of Running USA’s founders in Southern California in 2004, the Running USA annual conference has grown to become the best-attended, most esteemed gathering of running industry professionals from around the USA and the world. Now moving locations each year, the conference has been held in Los Angeles, San Diego, Savannah, Houston, San Antonio, Orlando, New Orleans and now San Juan, Puerto Rico. Follow the fun with hashtag #RUSA19 on Twitter, Facebook, and Instagram.

Running USA is a tax-exempt, not-for-profit organization devoted to improving the status and experience of distance running and racing in the United States through collective marketing and promotions, information and communications within the industry and to the national media, services to events and industry members, and the development of American world-class stars. It seeks the advancement of the sport and the provision of value to each of its members’ events and businesses. For more information, visit RunningUSA.org